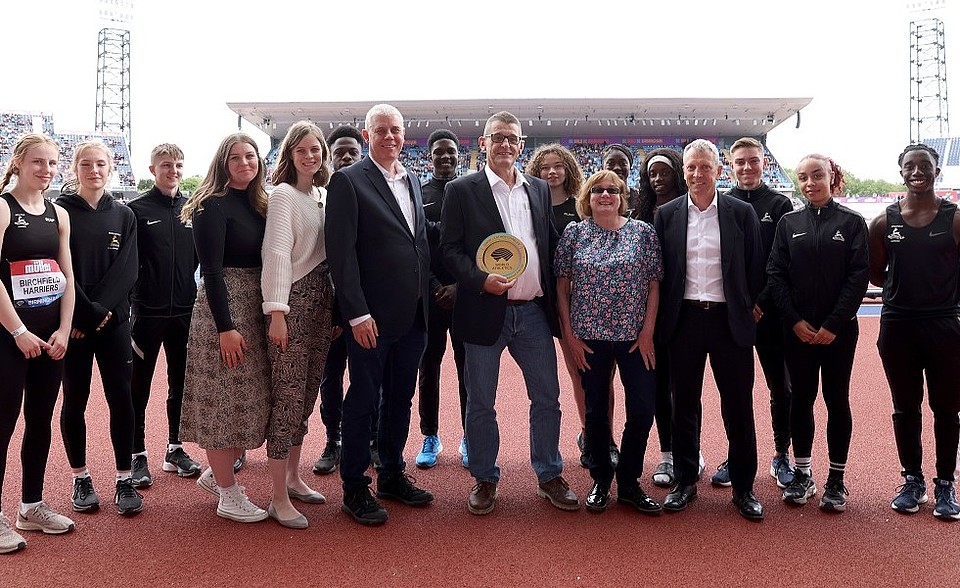 The presentation of The World Athletics Heritage Plaque honouring Diane Leather Charles, who in 1954 became the first woman to run below five minutes for the mile, was presented at the Muller Birmingham Diamond League on Saturday (21), the second fixture in the Wanda Diamond League.

The plaque was awarded to Leather in the posthumous category of ‘Legend’ at the World Athletics Heritage Mile Night in November 2019.

The World Athletics Heritage Plaque is a location-based recognition, awarded for ‘an outstanding contribution to the worldwide history and development of the sport of track and field athletics and of out-of-stadia athletics disciplines such as cross country, mountain, road, trail and ultra-running, and race walking’.

The presentation was conducted by Jack Buckner, 1986 European 5000m champion and the incoming CEO of UK Athletics, behalf of World Athletics Heritage to Leather’s eldest son Matthew Charles. They were joined by other members of the family, and members of Birchfield Harriers, for the presentation at the newly refurbished Alexander Stadium.

Leather’s plaque will be placed on permanent public display at the Stadium in the West Midlands, near the site of the Birchfield Harrier’s greatest athletics feat.

On 29 May 1954, less than a month after Roger Bannister had clocked his famous 3:59.4 in Oxford, Leather recorded a largely unheralded 4:59.6 for the mile at the Alexander Sports Ground. She reduced that world mark down to 4:50.8 and then 4:45.0 in London the following year, a time that remained the fastest by a woman until 1962.

That women’s records for the mile were not officially ratified until 1967 speaks volumes for the era in which Leather, who retired in 1961 aged 27, ran. It was not until 1972 that the 1500m, which would have been Leather’s preferred distance, became an Olympic event for women.