Stars full of London excitement ahead of Muller Anniversary Games 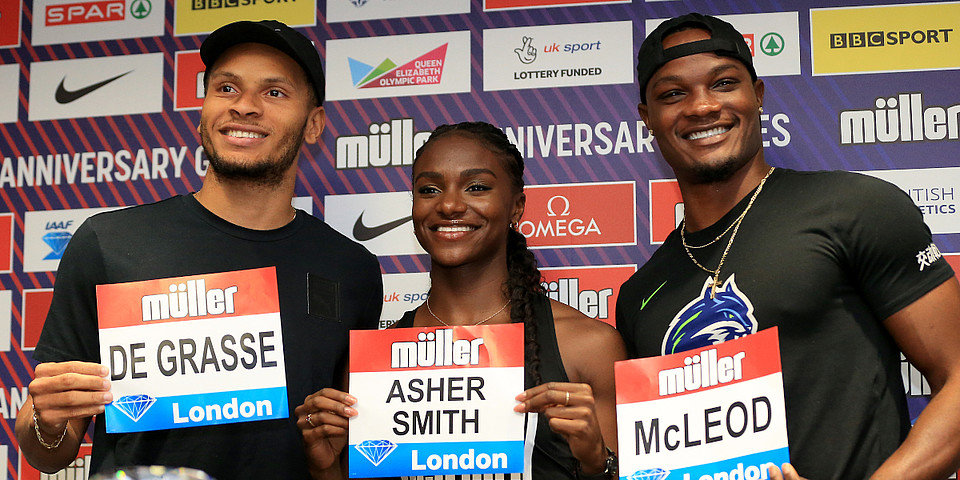 · British stars Asher-Smith and Muir spoke of relishing their respective tests in front of a home crowd.

· A range of the world’s most talented athletes head to the Müller Anniversary Games this weekend with hopes for another record-breaking meet.

Triple European champion and multi-gold medallist Dina Asher-Smith is relishing racing in her home city and has her sights set on showing strongly over 100m in front of a British crowd.

The British national record holder over the 100m and 200m currently sits first in the world rankings with the fourth fastest time this season, clocking 10.91s in Lausanne in early July.

Speaking at the press conference ahead of the Muller Anniversary Games, Asher-Smith commented: “Every field I’ve come into this year has been like a World or Olympic final. Whenever you step on the line you know you have to bring your best.

“But we all know we have to peak at the end of September coming into October, so I’m going to make sure I’m in the best shape possible for Doha.

“Going into this Diamond League it’s about getting into it and making sure I hit the points that my coach wants me to under the pressure. I’m really hoping to put on a good show for the crowd. It’s always such a warm crowd that are vibrant and gracious to all the competitors.”

The British golden girl will go head-to-head with the likes of double Olympic champion Shelly-Ann Fraser Pryce (JAM) among others on Sunday when the 100m takes place at 15:50 to bring the curtain down on this year’s event.

In other British interest, homer favourite Laura Muir races over 1500m as part of the Saturday programme. The European champion and multi-British record holder has the fastest season’s best in the field courtesy of her scorching 3:56.73, her second quickest time ever, and the Scot was in buoyant mood ahead of competing on Saturday.

“It’s just whether all the boxes on the day can be ticked and if I can pull it off. It’s going to be a really competitive field. I think it’s going to be really exciting.”

Set to line up against Faith Kipyegon among others, unfortunately the field will now be without the Kenyan athlete with her management releasing the below statement on Friday afternoon: "Faith developed an injury at the adductor magnus. Racing with high intensity is too high risk at this moment"

Olympic and World Champion Omar McLeod of Jamaica will tackle the 110m hurdles on Sunday, facing home favourite Andrew Pozzi in whart’s set to be a fascinating showdown.

The effervescent McLeod has the fastest season’s best in the field with 13.12, and speaking ahead of racing in London he said: “It’s going to be epic as always!

“Every time you race the hurdles you have to bring your A-Game. It’s literally a contact sport. I’m not going to take it for granted. I won the World Championships here in 2017 so the stadium holds some great memories and it’s a very special place for me.”

This year, and with his profile further enhanced on the back of a European record run earlier this season, the 23-year-old said:

“I very much like it here in London and that’s why I keep coming back. For me, this is where it all started. It holds some great memories for me. The track is very good and the event is world class.”

Sifan Hassan (NED) broke the world record in the mile last week in Monaco with a blistering time of 4:13.22, and is set to take on the 5000m this weekend.

The multi-world medallist won the inaugural Millicent Fawcett Mile last year and goes into this year’s event confident with her 5000m season’s best of 14:38.54.

As the current world number one, Tirunesh Dibaba’s (ETH) world record of 14:11.15 could be at stake - Hassan is remaining modest: “Depending on the weather, I’d like to run a personal best, and under 14:13.”

Also facing the media and lining up this weekend will be Canadian Andre De Grasse in the 100m.

After a welcome return from injury and now rounding into form nicely, the triple Olympic medallist goes up against British sprinter Zharnel Hughes and Yohan Blake (JAM) - who have both run sub-10 seconds this season.

De Grasse commented: “I’m definitely looking forward to racing and getting back to where I was before I was injured and preparing for the World Championships.

“This weekend is about running fast and hitting my first sub-10 this season. It’s anybody’s game. There’s no true favourite.”