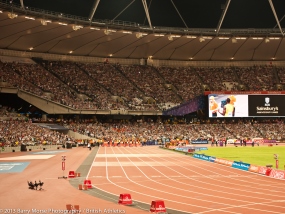 The Sainsbury’s Anniversary Games staged by British Athletics has been nominated in two categories in the International Sports Events Management (ISEM) awards – Outstanding Team Contribution and Best Use of Event Overlay and Facilities.

The Sainsbury’s Anniversary Games was created by British Athletics to capture the national mood of celebration and to reinforce athletics’ status as the number one Olympic and Paralympic Sport.

Pre-event marketing attracted nearly 250,000 registrations, meaning that when tickets went on sale on 19 April 2013, they sold out in just 75 minutes.

The British Athletics events team, which was only created in 2012, had just six months to deliver the event, from receiving the go ahead in January to the Anniversary weekend in July. In that time they had to conceive, create and deliver every aspect of the event from securing sponsorship, creating the brand, booking the athletes, transforming the stadium, media operations and publicity. This included chartering a plane to bring back athletes from the IPC World Athletics Championships in Lyon.

The Sainsbury’s Anniversary Games became an event of national importance, and made athletics the focal point of the one year celebration of the London 2012 Games. It received the largest ever TV audience and the highest ever media profile for an athletics meet in Britain, outside of the Games

Research from SportsWise on the event experience for the 180,000 fans who attended, reported that 95% of ticket purchasers would buy a ticket for a similar event and an astonishing 23% claimed the event was “the best event they had ever been to.”

In a second category, the Sainsbury’s Anniversary Games and supplier Creative Technology Ltd have been nominated for best use of event overlay and facilities. Creative Technology has worked closely with British Athletics for many years to provide screen and event presentation services to all of the sport’s major televised events.

At the Sainsbury’s Anniversary Games, CT provided two vast 200m2 LED screens which were located at either end of the Stadium. The two screens provided all the spectator information, competition data, video and replay feeds utilising the full colour potential of the screens to ensure a fully integrated display.

The screens provided a more visually striking effect than that used at London 2012 where the displays were restrained in having to use a mixture of the Panasonic 12 F colour display for the video content and a single colour Omega display for the data and information boards.

Controlled via a Spyder switcher for production, CT also had two editors on site managing the film and video content.

The Stadium was a blank canvas for the Sainsbury’s Anniversary Games as the majority of the infrastructure had been removed following London 2012. As a result, CT used IPTV (Internet Protocol Television) to integrate the hospitality and visitor information feeds with the video and data content while managing with the challenging restrictions on the in-house fibre network. CT put in the most appropriate system with the least impact on the existing building structure and ensured that the system worked seamlessly and, once removed from the Stadium, no noticeable trace was left.

“We are absolutely thrilled that the Sainsbury’s Anniversary Games has been nominated in two categories at the International Sports Event Management awards.

“This is recognition of the superb performance of the British Athletics TV Events team this summer in staging the Sainsbury’s Anniversary Games and making it one of the biggest sporting events in the UK in 2013.

“When I made the decision to bring the management of our televised events in house nearly 18 months ago, I was envisaging building delivery expertise for the IAAF and IPC World Championships in 2017 through elevating our Diamond League meetings. As part of that 2013 offered a unique opportunity to aim high early and transform the presentation of athletics.

“Since that time the British Athletics team has delivered 11 world class athletics events watched live by over 300,000 athletics fans in five different cities in the UK. This has included four IAAF Diamond Leagues, the inaugural IPC Athletics Grand Prix Final, the European Team Championships in Gateshead and the British Athletics Indoor Grand Prix, which is the biggest annual indoor event in the world.

“I would like to thank the team and our key partners - Sainsbury’s, The National Lottery and UK Sport - for their hard work, dedication and professionalism which has driven these events forward. As we build towards the IAAF and IPC World Championships in 2017, I’m proud that British Athletics is now recognised as the leading athletics delivery team in the world.”

To watch the behind the scenes video of the Sainsbury’s Anniversary Games visit <link http: www.youtube.com>British Athletics TV