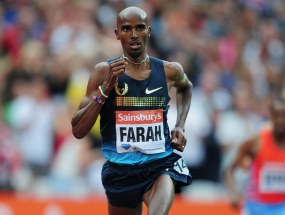 
Farah will make his first track appearance since winning double gold at the IAAF World Championships in Moscow and he is excited about getting back out in front of a home crowd at the Sainsbury’s Glasgow Grand Prix.


Farah said: “Glasgow will be one of my first track appearances in front of a home crowd in 2014, and having produced my best in front of the British public in London, I’m really looking forward to getting back out there and taking in the home support. Nothing in the world can compare to a British crowd and I will be doing everything I can to get the Hampden crowd going.”


Ohuruogu, who broke the British record on her way to claim the world 400m crown in the Russian capital, will be making her first appearance in the city since 2006 after starring at the annual International Match at its previous home, Kelvin Hall.


“It is a real privilege to be competing at the first ever athletics event at Hampden. To have potentially 30,000 there in July, it’s going to be an amazing atmosphere for both athletes and spectators,” said Ohuruogu.


British Athletics’ Chief Executive Niels de Vos added: “Mo and Christine are two of the greatest ever British athletes and we are delighted that they will be taking part in the Sainsbury’s Glasgow Grand Prix this summer.


“They will be joined by all of the top box office attractions from the world of athletics. Athletes love competing in the UK knowing that they will get incredible support and a fantastic atmosphere in Glasgow.


“I’d urge everyone to ensure they register their interest on the British Athletics website. Last year for the Sainsbury’s Anniversary Games, the number of people registering massively outweighed the number of tickets available, which meant that they never went on public sale. With Commonwealth Games athletics tickets heavily oversubscribed, we fully expect the same situation to occur again, so it is vital to register to be in with a chance of seeing the world’s best at the Sainsbury’s Glasgow Grand Prix.”


Glasgow City Council Leader Gordon Matheson said: “It will be an honour to host the Diamond League series in Glasgow for the first time, and I’m thrilled that we will stage such a high profile competition less than two weeks before the Glasgow 2014 Commonwealth Games.


“It’s fantastic news that Team GB double gold medal winner Mo Farah has signed up to compete – and I look forward to witnessing the ‘Mo-bot’ in our national stadium as part of our Year of Glasgow celebrations. Mo is a phenomenal athlete and he will go down as one of the all-time British greats following his heroics at London 2012.


“The best athletes from around the globe are desperate to compete in Glasgow, and this underlines why we are one of the world’s top ten sporting cities.”


Paul Bush OBE, Chief Operating Officer for EventScotland said: “The announcement that Mo Farrah and Christine Ohuruogu will compete at the Sainsbury’s Glasgow Grand Prix, underlines the quality of athletes competing at the event at Hampden. With a host of World and Olympic medals to their names, it will be a unique opportunity to see two of Britain’s best athletes competing in Scotland, with more names to be confirmed in the coming months. Scotland is the perfect stage for events and I am sure that tickets for this round of the IAAF Diamond League will be in high demand during what is an incredible year for sporting events.”