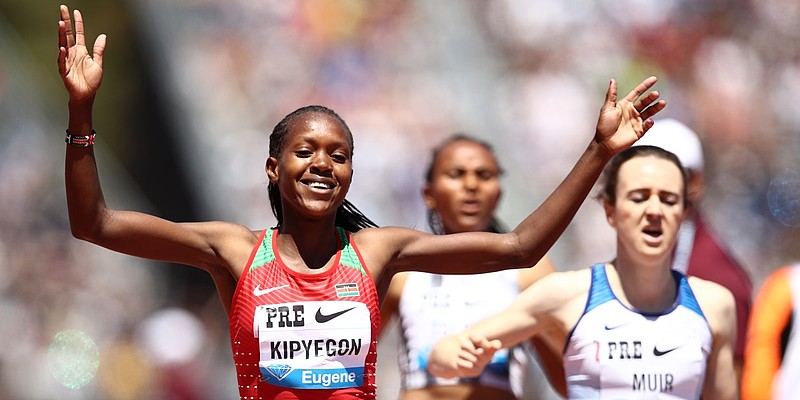 Faith Kipyegon got the better of Laura Muir in Stanford

There was a strong showing from the confirmed Müller Anniversary Games athletes at the Prefontaine Classic – the seventh leg of the IAAF Diamond League – held in Stanford this year, with the world’s best track and field athletes out to impress ahead of the meeting in London later this month.

Olympic and world 1500m champion Faith Kipyegon made a dream return from her maternity leave by winning the women’s 1500m on Sunday, beating reigning European indoor and outdoor champion Laura Muir to top spot by just 43 hundreths of a second.

Kipyegon had been out of action on maternity leave for two years before Sunday’s meet but the 25-year-old proved she is hungry to return to action with her first-place finish.

She held off final lap assaults by Great Britain’s Muir and USA’s Shelby Houlihan to clinch the win with a team of 3:59.04.

Muir, who won in Stockholm earlier this month and recorded her second-fastest time ever over the distance in Rome, clocked a solid 3:59.47 to finish second.

Gudaf Tsegay of Ethiopia, who will also be competing at the Müller Anniversary Games in July, came in fourth with a time of 3:59.85.

In the women’s 200m, Great Britain’s Dina Asher-Smith was not able to maintain her winning streak having won the previous two Diamond League events as she crossed the line in third in 22.42 in a race won by Nigeria’s Blessing Okagbare in 22.05.

Confirmed Müller Anniversary Games stars Elaine Thompson and Dafne Schippers finished in second and sixth respectively with times of 22.21 and 22.62.

Asher-Smith, Thompson and Schippers will be going head-to-head in the 100m at the London stadium in July.

Hughes, the joint-fastest British man over 100m this year, had already gone sub-10 once in Jamaica and showed his consistency again in Stanford, but it was world silver medallist Christian Coleman took the win in a world-leading time of 9.80.

Coleman, who pulled away from world champion Justin Gatlin for the convincing win, established himself as one of the favourites for the race at the 2019 Müller Anniversary Games.

“I just compete and try to come out with a win, but obviously guys are steadily getting better and better and always running faster.

“It’s going to take some pretty good training to get a gold medal at the end of the year.”

Tickets for the 2019 Müller Anniversary Games are on sale at https://www.theticketfactory.com/british-athletics/online/