Bolt stars on day one of Sainsbury's Anniversary Games 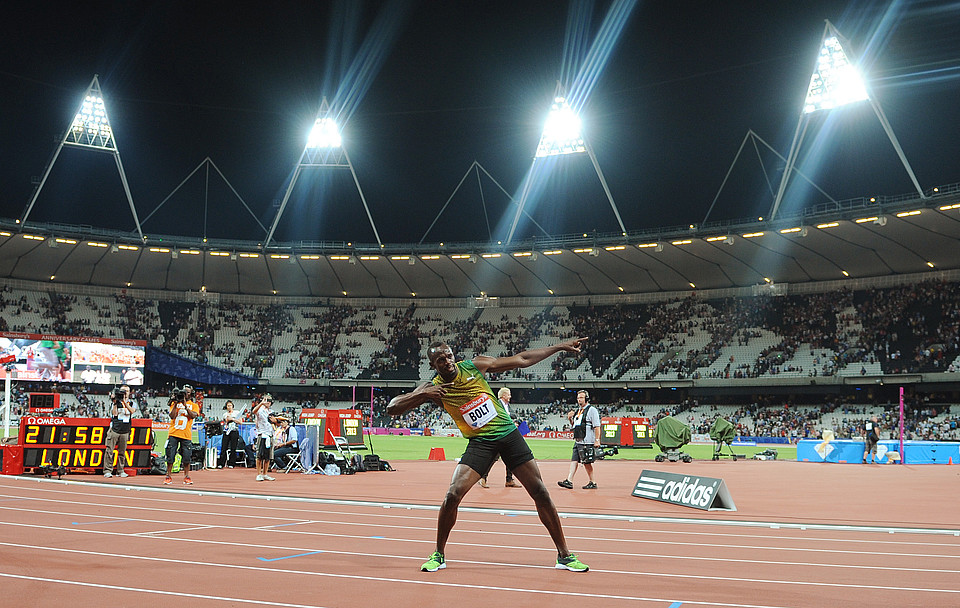 With memories of London 2012 still fresh in their memories, 65,000 spectators packed out the Queen Elizabeth Stadium to provide an electric atmosphere on the first night of the Sainsbury’s Anniversary Games.

The eagerly anticipated men’s 100m served as a fitting finale to a fabulous evening’s athletics, with the fastest man in the world recording the victory everyone expected. The only disappointment was that the head to head between Bolt and the second fastest Briton ever, James Dasaolu (coach: Steve Fudge), didn’t materialize due to the latter picking up a tight hip flexor in warm up.

Nevertheless, Bolt entertained the sell-out crowd with his trademark pose after crossing the line a comfortable winner in 9.85. Despite a poor start, the Jamaican finished 13 hundredths ahead of American Mike Rodgers thanks to a very strong second 50 metres. Fellow Jamaican Nesta Carter was third, also sneaking inside 10 seconds with a 9.99 clocking. Afterwards Bolt commented:

“The crowd here is unbelievable. They’re wonderful. It’s good to be back here. I’ve got a lot of love for this stadium and this crowd, and I’m feeling good. It was nice to get the win and I’m confident going in to Moscow.”

Dwain Chambers finished fifth in 10.10, and he added: “It was amazing being back here again; that was like my Olympic final. It’s an amazing occasion and like they say time flies when you’re having fun. I’m happy but I’m not going to Moscow just to make up numbers. Tonight has given the sport what it needs – some excitement.”

Proceedings were kick started by an all British affair in the men’s 100m ‘B’ race, which was won by London 2012 semi-finalist Adam Gemili (Michael Afilaka) in a time of 10.16 (+0.3m/s). He will head to Moscow to take on the world’s best over 200m, as well as make up part of the GB & NI 4x100m relay team, which contains second place finisher Harry Aikines-Areetey (Rana Reider) who also clocked 10.16. After the race Gemili commented:

“It was a season’s best, which I’m happy with. The race itself wasn’t brilliant again, but I’m glad to come away with the win and to enjoy the crowd. I feel in a lot better shape than last year if I’m honest. I’ve got the 200m at the World Championships and I can’t wait. To be able to do another event will be great and hopefully I’ll be able to do both events at future competitions.”

Zuzana Hejnova won a very close women’s 400mH, where local girl Perri Shakes-Drayton (Chris Zah) finished an impressive second. Shakes-Drayton led coming off the final bend only to be overhauled over the final hurdle by the world leader, who clocked a personal best and national record of 53.07. There was also a personal best for Shakes-Drayton who took second in 53.67, a performance that sets her up well for an assault on a medal at the IAAF World Championships in Moscow in three weeks’ time.

“I’ve forgotten the Olympics, and I’m a lot happier to compete here since then. Today I got a PB so I’m happy and now I want to make the final in Moscow and I’ll be wanting to bring home some silverware for sure.”

The women’s 4x100m relay served up the usual drama with dropped batons and close changes, but the GB & NI quartet kept their cool to cross the line first in 42.69, the fastest time by a British team for 12 years. 17 year old Dina Asher-Smith (John Blackie) got the team off to a great start, before the in-form Anyika Onuora (Rana Reider) powered down the back straight to hand over to Annabelle Lewis (Roger Walters) with a slight advantage. Lewis ran a great bend before Ashleigh Nelson (Michael Afilaka) completed the job on anchor.

After the race, third leg runner Lewis said of the team’s performance: “Wow - what a reception. We’re really, really happy. It’s the fastest time by a GB woman’s team in 12 years! The atmosphere in the stadium is absolutely amazing - as we walked off we were walking past everyone to get to where we needed to be and everyone was just clapping and cheering us. I’m so glad we got to experience this.”

The men’s high jump was arguably the best competition of the night, with world leader Bohdan Bondarenko and Olympic silver medallist Erik Kynard exchanging blows throughout, before the former took victory. Neither man failed a height until Kynard’s three failures at 2.40m, but due to passing 2.38m, Bondarenko’s clearance at this height was enough to earn him victory. He went on to attempt a world record 2.47m, at which he had two very good attempts, but that clearance will have to wait for another day.

GB & NI’s Olympic bronze medallist Robbie Grabarz (Fuzz Ahmed) returned to the venue of his greatest achievement in the sport to finish fourth behind the aforementioned two and joint bronze medallist from twelve months ago Mutaz Essa Barshim, with a best of 2.24m.

In the women’s pole vault, it was a reverse of the result 12 months ago, with Yarisley Silva breaking the Diamond League record with a 4.83m clearance to take victory ahead of Olympic champion Jenn Suhr. With just two successful clearances, both first time at 4.63m and 4.73m, Suhr had to settle for second behind the Olympic silver medallist.

The men’s 400m boasted a truly world class field, and the winning time of 44.65 for Kirani James only confirmed that. He powered down the home straight to leave runner-up Tony McQuay in his wake. Fresh from his World Championship ‘A’ standard two weeks ago, Nigel Levine (Linford Christie) clocked 45.58 for sixth.

2009 IAAF World Championship 1500m bronze medallist Shannon Rowbury outkicked her opponents to take victory in the women’s 3000m. It turned out to be an American 1-2-3, with Gabriele Anderson second, and American 5,000m record holder Molly Huddle third. Moscow bound Eilish McColgan (Liz McColgan) was the top British performer, and she finished ninth in a personal best 8.53.66.

The women’s 1500m was a close affair, with Kenyan Mary Kuria finishing fastest to take victory in 4.08.77. Laura Muir (Andy Young) was the best placed of the GB & NI representatives in ninth, and her 4.10.21 clocking, less than 1.5 seconds behind the winner,  will give the 21 year old confidence as she heads to Moscow.

Piotr Malachowski continues his dominance in 2013, the Pole launching his discus out to 67.35m to take another Diamond League victory. GB & NI's Brett Morse (Andy Brittan) finished a very respectable sixth with a throw of 64.84m. In the women's triple jump, Yekaterina Koneva took victory with a 14.52m jump.