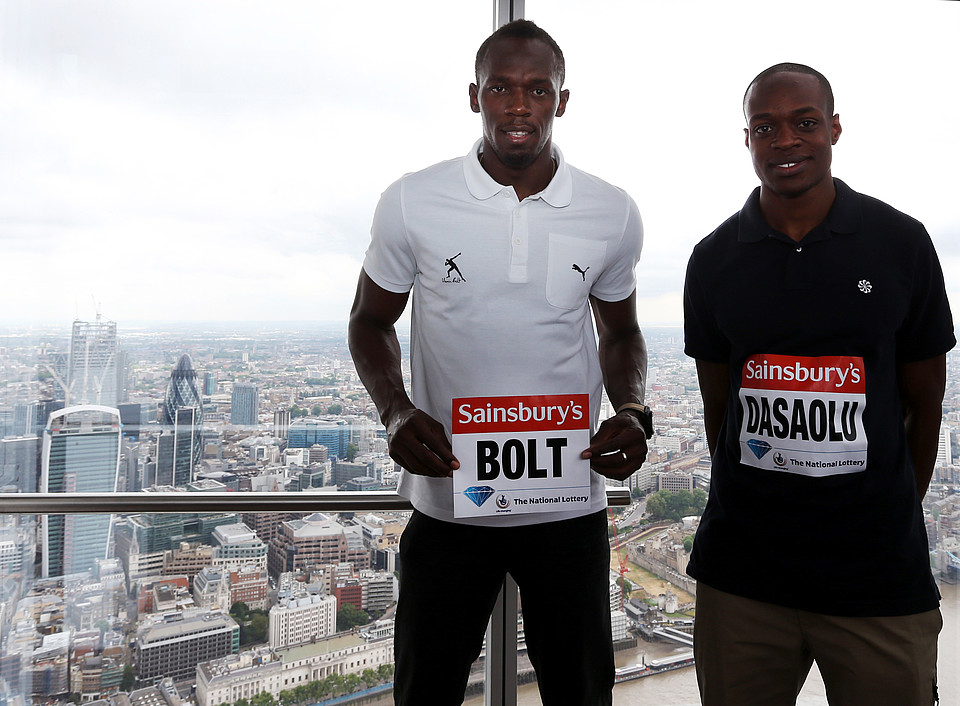 With just one day to go before the Sainsbury’s Anniversary Games, Usain Bolt, the fastest man on the planet, and James Dasaolu (coach: Steve Fudge), the second fastest Briton ever came together to discuss the weekend’s action.

After three weeks of hard training, six time Olympic champion Bolt is excited to see what shape he is in this weekend, and talked about the experience of the London 2012 Olympics.

“The most overwhelming thing was the amount of people that were always in the stadium, no matter whether it was a heat or semi-final, it was full, so for me it was a great experience.

Beijing was a mind blower for a lot of people, especially for me as it was a wonderful feeling winning my first Olympic gold medal. But in London I just knew I had to defend my titles, so people were expecting me to do well, so it was different.

I really enjoy competing in London – it’s pretty much like competing in Jamaica as there is a lot of Jamaican support. For me, you’ve just got to enjoy it; it’s always good to feed off the crowd, work hard, enjoy it, and just go and run as fast as possible.”

The Jamaican was reminded that, with a time of 9.91 from the Sainsbury’s British Championships, Dasaolu is quicker him this season, but was confident of his current form.

“You take note of everything that goes on, but I’ve been training and getting everything together, and looking forward to doing this wonderful race tomorrow -I’m ready to go.”

Dasaolu, who has knocked nearly two tenths of a second off his personal best this year, puts his improvement down to his coach, a sensible training programme and improved consistency in training.

“The big change for me is that in January 2012 I made the move to train with Steve Fudge and he’s been able to keep me injury free and healthy, so I’ve been able to have a full winter and build on what I’d done in 2012, hence why I’m now able to run personal bests.

It’s going to be a tough race against the quickest man in history who has six Olympic titles amongst many other accolades. I think everyone [in the field] has gone sub-10, so I’m just going to give it my best and enjoy running in front of a home crowd.”

Both men will also line-up in the 4x100m relay on Saturday afternoon, Bolt for Racers Track Club and Dasaolu for GB & NI ‘A’, and the later spoke with a smile about the prospect.

“We’re going to get the baton round, that’s one thing I can say! We just want to run quick times, and secretly as a team we’re kind of eyeing up a British record heading towards Moscow. Confidence is high among us and we’re a new look team who just can’t wait to get out there on Saturday and compete.”