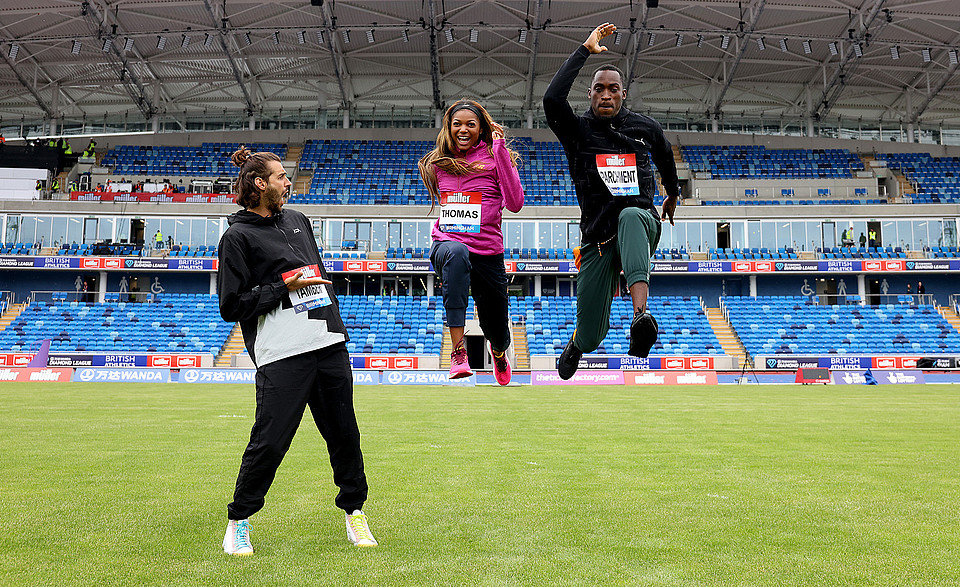 The Müller Birmingham Diamond League will feel like a one-day Olympic and Paralympic Games according to the world-class athletes ready to rip the label off the brand-new Alexander Stadium tomorrow (Saturday 21 May).

Renovated for the Commonwealth Games in just over two months’ time, the Müller Birmingham Diamond League is the biggest event to be held at the Alexander Stadium since works were completed and the grandeur of it is clear to see from those set to compete.

Parchment, the Olympic men’s 110m hurdles champion from Tokyo and who will go head-to-head with 2016 gold medallist Omar McLeod (JAM) and former world indoor champion Andrew Pozzi (GBR), led the comparisons of the venue with the prestige of a Games.

“It’s looking like an Olympic stadium,” said Parchment. “I came here first in 2012 and it was very small, very cold. Birmingham [Commonwealth Games] was not in my thinking initially but my coach said go for it and it will be good to get gold. It should be a lot warmer in July and August.

“So far I am feeling good, I think I am in good form. I still have a lot of work to do but I am looking forward to executing a really good race [in Birmingham] and hoping to get a really lovely time on this beautiful track.”

One of the most charismatic athletes on the global circuit, Tamberi competes in the men’s high jump in Birmingham, and is up against joint world leaders Sanghyeok Woo (KOR) and Hamish Kerr (NZL).

Olympic gold for Tamberi represented six years of hard work having broken his ankle in 2016, missing the Rio Games, and he admits he is fully motivated to complete the major title set at the World Championships in the USA later this year.

“The biggest question after the Olympics was would I be motivated in same way?,” he said. “After following that dream for so long, you’re scared when you achieve it. Straight after the Olympics I realised what I had done, and I said to myself that I missed gold at the worlds. That is something that is motivating me.

“I am really happy and proud to be part of it [Grabarz’s presentation]. He was on the track with me for a long time and I always looked at him as a friend and somebody to learn from. He was such a great guy and a great athlete, and I am really happy. He deserves that medal.”

One of the highlights of the Müller Birmingham Diamond League is sure to be the women’s 100m, which despite the withdrawal of Elaine Thompson-Herah (JAM), still involves world and European champion Dina Asher-Smith (GBR), multiple Olympic and world medallist Shericka Jackson (JAM), Tokyo 200m bronze medallist Gabrielle Thomas (USA) and many, many more.

Asher-Smith and Thomas both spoke the day before competition, praising the new Alexander Stadium, and revealing their expectations for Birmingham. For Asher-Smith, it will be her season opener over 100m following a third at the Doha Diamond League just over a week ago.

“It [the stadium] is beautiful. It looks fantastic and I am super excited for a home Commonwealth Games,” said Asher-Smith, who declared her winter training period, recovering from a hamstring injury that cruelly denied her bid for individual Olympic medals in Tokyo, as solid with no interruptions.

“It has been a solid start to the season, to what is going to be a very good year. We are all happy with everything so far. If you 10.7, 10.8 everyone would be really happy. It is definitely May; everyone is always mindful that it is May with three major champs at the other end of the season. Hopefully it will be an amazing race, I feel good, I am excited.”

Unlike Asher-Smith, Thomas – the Olympic bronze medallist in the 200m from Tokyo – has had several outings over 100m this season, with her legal best 11 seconds dead in her home country over a month ago and winner of that 200m in Doha.

A Harvard University graduate, now combining a Masters in Epidemiology with her sprinting career, Thomas said: “I raced in Birmingham in 2018. I can’t remember what it looked at the time, but it looks really beautiful now and I’m really excited about the energy. I know that the UK has a lot of athletics fans, so I know it is going to be a really fun competition.

“I am looking to break 11 seconds, I’d like to get a wind legal 10.8. Hopefully if the weather allows it will be a great competition. The stadium looks beautiful, and I know the energy will be amazing. Coming off the race in Doha, I am in a good head space to do it.”

The Müller Birmingham Diamond League will once again showcase the best in global Paralympic talent, led by champions from Tokyo (all GBR) Young, Sophie Hahn and Hannah Cockroft.

Young was one of the British stars at the Paralympics in Tokyo, winning T38 100m gold, and cannot wait to further demonstrate his ability in Birmingham in the men’s mixed ambulant 100m, ahead of another outing at the Alexander Stadium for the Commonwealth Games.

He said: “It is honestly beautiful. To come back here after a few years away into a brand-new stadium, it is so exciting to see and so exciting knowing that I am going to be part of a great stadium to run in.

“I luckily have the Commonwealth Games and there are a couple of IPC Grand Prix’s to go out to. Every single para athlete really appreciates the support and sponsorship we’re getting. We are excited to push para sport forwards together.”

It will also be an important Saturday for British Olympic silver medallist Hodgkinson (GBR), who in the women’s 800m is set to run for the first time since injury forced her to withdraw from the World Indoor Championships in Belgrade after a fine start to 2022.

She said: “Belgrade wasn’t disappointing for me. I was going there hoping to bring back a medal or a title. I made the decision not to run and instead took six weeks to get healthy and get my quad strong so it doesn’t happen again.

“I do think everything happens for a reason and maybe it happened then, so it doesn’t happen in June. I have moved on with it, I am healthy and in a good place. I like to go into my races and just attack it and see what happens and who comes with me.”

The renovated Alexander Stadium will be particularly different for the women’s pole vaulters with the runway and bed moved from the backstraight. Olympic bronze medallist Bradshaw (GBR) has a full range of Birmingham memories and is excited to create new ones.

Bradshaw is back from injury and illness herself with the Müller Birmingham Diamond League just her second outing of 2022 and she said: “It is a beautiful stadium. I think it is the most beautiful stadium in the UK now, it surpasses the Olympic Stadium, I am super excited. It will be interesting to see with the dynamics of the stadium how the wind hits. For me it is important to know that ahead of Commonwealth Games so I can plan for that.

“I have had a really challenging nine months with illness and injury, which has tested my motivation. I am entering this new phase feeling weightless, carefree. I am just loving every minute and every opportunity is enjoyment, fun and taking it as it is. I never thought I’d reach this point – I have and I feel really amazing.”

As is an occurring theme for this meeting, the men’s 1500m is stacked with talent. Leading Brit, based on his Olympic bronze from Tokyo, Josh Kerr (GBR) will go up against world indoor champion Samuel Tefera (ETH) and current world leader Abel Kipsang (KEN).

As is customary from recent years, the home talent is also great with the field including Piers Copeland (GBR), the British indoor champion and Welsh indoor record holder, and George Mills (GBR), the 2016 European under-18 champion.

Kerr’s Olympic bronze came in the quickest 1500m final at the Games ever but he knows he can take absolutely nothing for granted, especially at home. He said: “It’s a such deep event [in Britain] and every year it surprises me with new people coming through. It is an amazing thing for us and the future of 1500 runners in GB.

“It is a shame as you used to just run the standard and make the team. On the day you wish it was like that but, before and after, you really enjoy it and you have turn up with you’re A game. I am always challenged on the UK circuit, more than I ever am on the US circuit.”