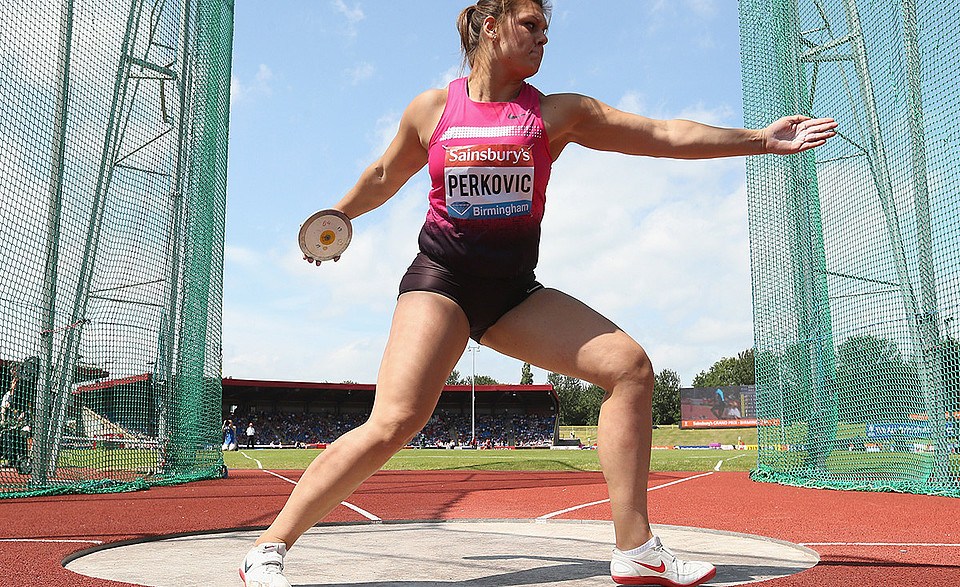 Just one week on from her European Athletics Team Championships victory, Judd ran her best ever time, breaking two minutes to finish on 1.59.85. Marilyn Okoro led for almost the entirety of the race, but Judd executed a perfect tactical performance to attack the final bend and sneak into first place.

Another late flurry saw Christine Ohuruogu make up ground in the women’s 400m to pip Amantle Montsho on the line, a performance as outstanding as it was dramatic. Leaving it late, Ohuruogu edged the race with a time of 50.63 to Montsho’s 50.64.

Double Olympic champion Mo Farah was on fine form as usual, even under close attention from World 10,000m champion Ibrahim Jeilan and Ethiopia’s Hagos Gebrhiwet – the latter to become Diamond League 3000m champion two years later. Farah showed all his experience to remain patient, before pushing ahead with just over 200m to go. The British great put on a show for the home crowd, obliging with his trademark ‘mobot’ celebration.

Britain’s hurdle stars secured a British one-two in the 400m event with an assured performance. Perri Shakes-Drayton and Eilidh Child didn’t hold back in the West Midlands, with the former clocking a season’s best of 53.82. Not to be outdone, Child broke her own Scottish record with a time of 54.22.

There was more joy in the hurdles for Great Britain as Tiffany Porter pushed herself to a season’s best time of 12.72 to finish ahead of the current Olympic champion and take third place in the 100mH. In the men’s 400mH, Rhys Williams had to settle for second after he was just edged out by Javier Culson – the Puerto Rican had taken bronze at the London Olympics the year prior.

In the men’s triple jump, it was an intense affair as Olympic champion Christian Taylor battled it out with World champion Teddy Tamgho. Both desperate to win, it was Taylor who came out on top – but after pushing each other to the limit they were both able to record season’s bests of 17.66m and 17.47m respectively.

Another Olympic champion saw more success on British soil, as Sandra Perkovic took victory in the women’s discus with a winning throw of 64.32m. The Croatian would repeat her success in the English capital in the next Olympic cycle, picking up another gold medal at the Rio Games.

Nine years on, world-class athletics talent returns to the West Midlands for the 2022 Müller Birmingham Diamond League. The likes of Dina Asher-Smith, Andre de Grasse, Elaine Thompson-Herah, Keely Hodgkinson and Josh Kerr will be on show at the newly revamped Alexander Stadium.

To experience the incredible competition, get your tickets now.